Breaking down on the motorway

If your vehicle breaks down while you are in the overtaking lane, try to coast to the hard shoulder on the left. Parking on the right-hand side of the motorway is the most dangerous place.

Sometimes you can be forewarned of engine failure, particularly on a motorbike where you are closer to the engine. You might notice a change in tone of the engine or that it seems down on power. Warning lights might start to appear on the dashboard, for example this check engine light in yellow or (worse) red.

You might also notice steam rising from the bonnet, metallic noises coming from the engine or transmission, difficulty changing gear, or the acceleration is no longer smooth.

It might not be the engine that's the problem: if you have brake failure you will need to stop, too, as well as if your windscreen is smashed, you have one or more flat tyres or you run out of fuel. If you run out of fuel on somewhere like the Harbour Bridge in Auckland, where there are no hard shoulders and your vehicle will cause a significant disruption, police might fine you.

Keep your vehicle serviced regularly to help minimise the risk of breakdowns, and always put more fuel in as soon as the fuel warning light comes on.

Emergency phones are located every 700-1200m on the motorway. Occasionally they will be closer than that if you are approaching a motorway on-ramp or off-ramp, so that you don't have to cross it. They are installed in pairs opposite one another so that a person needing one doesn't need to cross the carriageway.

They are dark blue with a red reflective phone icon, and alpha-numeric white reflective stickers giving the ID of the phone. The phones are often located behind barriers to give you protection, but you should always make the call facing traffic.

Phones are never placed where there is no hard shoulder, or if the hard shoulder narrows to less than 2.5m wide.

The phone microphone is 1400mm from ground level and there's one button to press that's 1200mm from the ground - you can't go wrong. 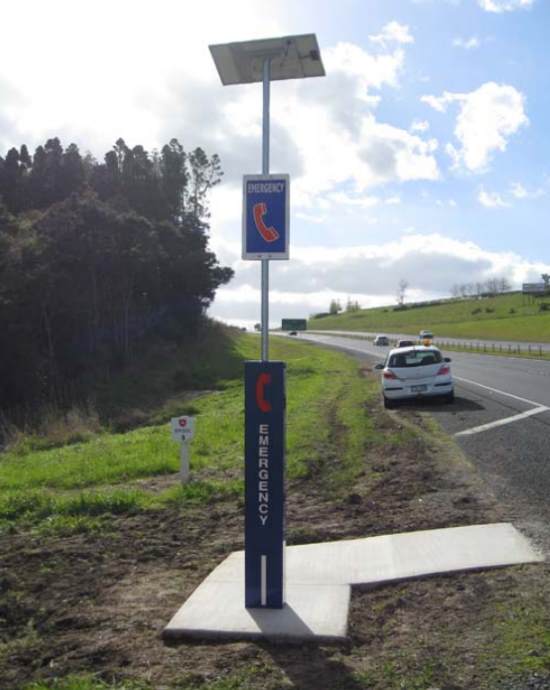