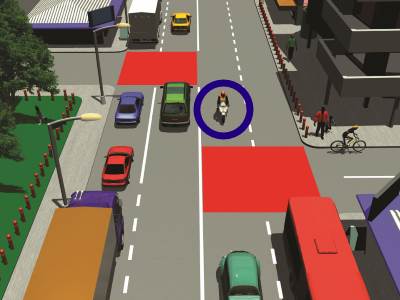 In the case of the motorbike, there is enough room for it to pull up behind the green car and still leave the red box free. For the blue car, it doesn't have enough room and would block the exit. The green SUV also doesn't have much room.

Blocking the exit doesn't only stop vehicles from pulling out, but it means that vehicles turning in from the other carriageway have to stop and that stops the traffic flow on the other side of the road (assuming there isn't a median strip).