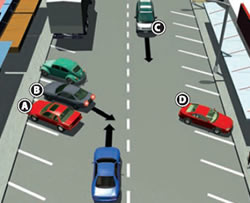 Let's take a look in more detail at the different hazard in this image.

Vehicle A doesn't look like it will move, so the hazards A creates are that it can hide pedestrians and pets, and it reduces the vision of the driver in vehicle B that is backing out.

Vehicle B is the obvious hazard. It is reversing already and the driver's view up the road will be obscured. The driver might be able to see you through vehicle A's windows, but imagine if this was a van or an SUV where the windows are at a different height. Therefore you should assume that the driver of vehicle B can't see you.

If vehicle B has a reversing camera this might provide a view up the road. Also, new technology called Rear Cross Traffic Alert is becoming more mainstream. This is where the reversing sensors scan up the road as the driver backs out. It's only really good for detecting slower moving vehicles such as bikes, though.

Vehicle C is unlikely to be a hazard unless you have to swerve around vehicle B if B backs out too far. Vehicle C could be a hazard if the car at D decides to reverse. However, the driver of D would easily be able to see C as there are no other vehicles blocking the view.

D might equally decide to reverse out onto your side of the road, but as C is plainly visible this is unlikely. D could also obscure a pedestrian, but as the pedestrian has a clear view of C it's unlikely that they would cross in front of you.

There is also a truck in the top left that is unmarked. As it is not indicating, we can assume that it won't move out from the kerb. If it was indicating then you would want to assume that it might not be able to see you because trucks have larger blind spots.

So, in this case, you have two choices: you can stop and wait for B to reverse out of the space. This is safest for both of you. Or, if you can see that the driver of B has seen you and has stopped, you can proceed past.