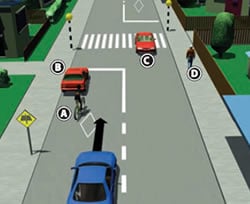 Cyclists can be blown off their path, or a person in the parked car could open the door in front of the cyclist. While the cyclist is the main hazard, let's take a look at the other hazards in this image and what could potentially happen. Advanced motorists will always be considering probabilities.

The vehicle at B could open the driver's door in front of the cyclist which means the cyclist will either hit the door or will have to swerve around the door. For you to then miss the cyclist you will put yourself in the path of the vehicle C.

Vehicle C doesn't appear to pose much of a threat. As long as you stay in your lane, it won't interfere with your trajectory.

The pedestrian at D looks like they might wait until they get to the crossing before crossing the road. However, they could equally start to cross when vehicle C passes them.

Vehicle B could be obscuring a small child or a pet that could run into the road.

In this scenario you should hold back and let the cyclist pass the parked car. Maintain good visibility of the pedestrian crossing. The cyclist will move back to the left once they've passed the car and then you will be able to overtake.