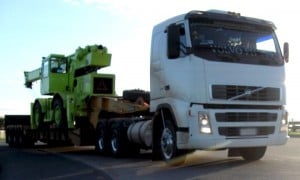 NZTA is asking for feedback on changes to penalties levied on freight operators whose vehicles exceed either the weight limits stated in Land Transport Rule: Vehicle Dimensions and Mass 2002, or those set out in a permit. The general limits are 20 metres long and 44 tonnes in mass. Permits can be obtained to exceed these and the rules are in place to protect other road users, plus the road infrastructure (road surface, bridges, etc)

The rationale is that current fines are insufficient to deter offending if an operator has no permit, but operators who do hold permits and exceed the requirements marginally are penalised out of proportion, and this imbalance appears to reduce the uptake of permits.

The proposal is to create graduated offences for those with a permit, and increase the levels of fines for overweight vehicles that don’t have a permit.

The intention is to reduce the total penalties payable for a permit breach in most situations. Data collected at numerous points on the highway system indicates that around 10% of heavy vehicle exceed the weight limit and over half are significantly overloaded. NZTA suspects that a small minority of freight operators flaunt the laws consistently and achieve an unfair competitive advantage, and that some operators load to the tolerance level of 45.5 tonnes rather than the specified maximum of 44 tonnes.

The proposed rules and fines are outlined in detail in this document.

If you want to have your say, visit this page and go through the submission process. Submissions close at 5pm on April 7, 2014.

If you want to test your knowledge of current weights and measures for class 3-5 vehicles, click here.

Tagged with: NZTA, weights | Posted in Heavy Vehicle, News
When was the last time you checked your Road Code knowledge?