› › Why are roads often sloped and not flat?

Why are roads often sloped and not flat?

Roads are angled for three reasons:

In an ideal world the road would be higher on the outside of the corner than the inside because this is safer and vehicles can travel around the corner faster without sliding. You can see this in action in American oval circuit racing such as the Indy 500 where it’s called ‘banking’ or ‘superelevation’. When a vehicle is turned at speed, a force acts on it to push it towards the outside of the bend. When the road is banked, however slightly, some of this force is transferred to the suspension rather than the tyres. It’s especially useful when the roads are slippery because it increases a driver’s margin for error.

The usual superelevation for New Zealand state highways is 3 degrees fall towards the inside of the curve. Where a corner has caused many accidents, the superelevation could be increased.

The speed of the road usually dictates the angle of superelevation that’s installed.

A two-way, single laned road with a crown has the centre line higher than the edges. This is the usual road construction for straight roads because it allows for drainage. It can cause problems, though, because tall vehicles lean towards the edge of the road and risk hitting poles and street signs close to the edge. 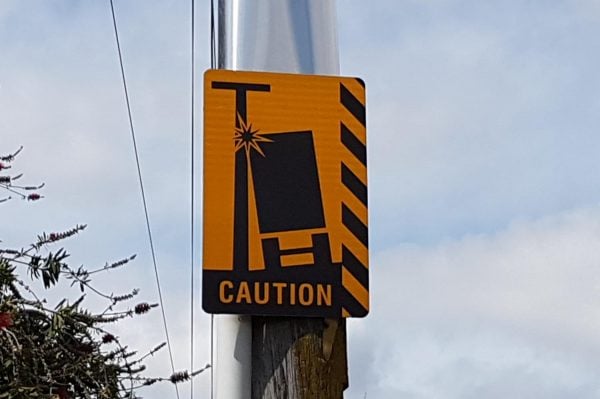 Puddles on roads cause a risk of aquaplaning, therefore drainage is important. As the road approaches a corner, the outside lane is rotated upward to form superelevation before the curve. The stretch of road where this happens is called the crown runoff.

The opposite of crown runoff is superelevation runoff where a fundamentally flat piece of road is gradually sloped into the correct superelevation angle before the corner.

In this diagram, the white part shows a normal 2-lane road where the centre line or crown is higher than the edges. This is approaching a right-hand bend where the outside of the bend should be higher than the inside. Therefore, the angle of the road is rotated upwards on the left and downwards on the right, forming the superelevation.

On a multi-lane road, there is a constant fall (‘crossfall‘) across the width of the lanes from the median strip to the edge of the left lane.

On a multi-lane road like a motorway, the surface is angled up from one edge because there’s usually a crossfall across the entire width of the lanes.

When a road slopes towards the outside of the bend it’s called adverse camber and it is more common on steep hills where it’s difficult to engineer superelevation into the road.

Tagged with: road, road construction | Posted in Advice
When was the last time you checked your Road Code knowledge?