› › How to stop a trailer from swinging side-to-side

How to stop a trailer from swinging side-to-side

Trailer sway is when your trailer starts swinging from side-to-side and is out of control. It can happen to any trailer when you are using a tow ball (i.e. a single pivot point) behind the rear wheels of the towing vehicle. Depending on how heavy your trailer is, if it becomes extreme it can either spin your vehicle around or tip it over.

How does trailer sway start?

The trailer will usually want to travel the path of least resistance – a straight line. When you turn a corner you force the trailer’s forward energy to change direction. This means the suspension on one side of the trailer is loaded up. As you straighten up, the trailer rocks back to the other side and in extreme cases this can cause instability.

Strong winds exert a sideways pressure on both the towing vehicle and the trailer. If the trailer is high-sided, like a caravan, horse box or furniture trailer, the trailer can be unsettled causing it to begin to swing like a pendulum. Gusty winds can create more than a tonne of force on the side of a caravan.

Liquids and animals both can move within the trailer in response to forces causes by cornering, changes in gradient, bumps on the road, braking and accelerating. If an animal moves at the same time as some other input, like a gusty side wind or you changing direction, this could initiate trailer sway. 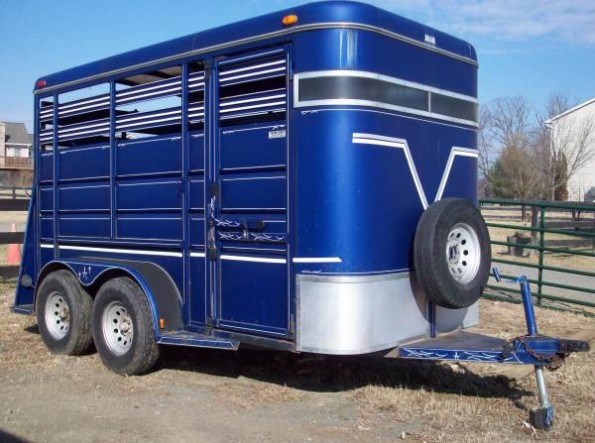 A horse can move around in the horse float

Having one tyre much flatter than the other in the trailer causes more drag on that side. The trailer will also be slightly tilted in that direction, meaning the load is less balanced.

How to prevent trailer sway

Many corners are marked with advisory speeds. They indicate at what approximate speed the g-force around the corner is 0.22g. 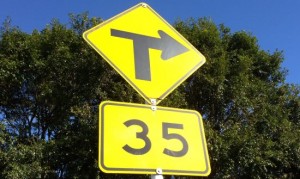 When towing a trailer, take note of these signs. Keeping your speed below the suggested speed is advisable

Use anticipation and scanning so that your braking and acceleration are smooth. Looking at least 12 seconds ahead (or as far as you can) will give you plenty of time to adjust your speed. Use other inputs like your GPS screen, vehicle brake lights ahead, treelines and road signage to give you clues. For example, the following sign indicates a hairpin bend ahead which means you should be slowing down until you can determine how sharp it is.

Safe trailer loading means a load which is secured (i.e. can’t fall off or out of the trailer) and is constrained. Some loads, such as live animals, can still move, but they are still constrained to a certain extent. Liquid loads could have baffle plates to stop the load sloshing around. A load which shifts or moves while you are driving could unbalance the trailer.

Balancing the load is important, too. In any trailer, heavy items should be as low as possible and over the centre of gravity of the trailer. Putting heavy loads behind the trailer’s axle creates lift on the rear wheels of the towing vehicle, meaning it could skid more easily, while putting too much weight on the tow ball can break or bend it and increases the load on the vehicle’s rear suspension which can cause it to ‘bottom out’ over bumps.

For larger caravans and trailers consider a ute/pick-up truck with a fifth-wheel option. 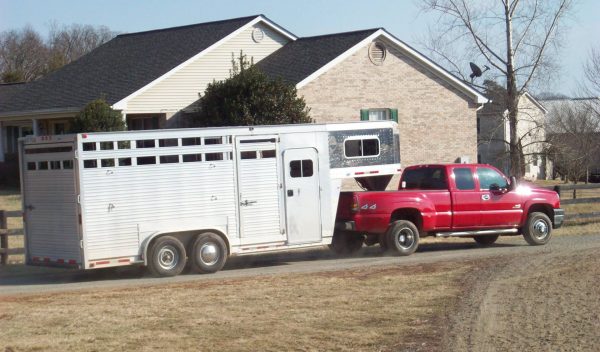 A fifth wheel setup, which is the same as articulated trucks use, allows much more weight to be positioned over the front of the trailer as it can be absorbed by the chassis of the towing vehicle. This means it’s more stable, i.e. less weight is behind the rear of the towing vehicle that could cause a pendulum effect.

If a fifth-wheel is not practical, but a tow hitch or tow ball that’s properly rated for the load you want to tow and contains mechanisms to reduce trailer sway.

Many new vehicles come with trailer sway mitigation or some variant such as trailer sway control or trailer stability control. As an extension of electronic stability control, they all do the same thing: automatically brake each wheel on the towing vehicle to help bring the trailer back under control.

Available for caravans, they detect when trailer sway starts by monitoring the g-forces. If sway is detected, the system applies the caravan’s brakes.

How to stop trailer sway

If your vehicle doesn’t have trailer sway mitigation and your trailer doesn’t have a stability control system you will need to have quick reactions because you could only have seconds to regain control.

Tagged with: tow bar, towing, tyres | Posted in Advice
When was the last time you checked your Road Code knowledge?