› › Is it safe to use cruise control in the rain?

Is it safe to use cruise control in the rain? 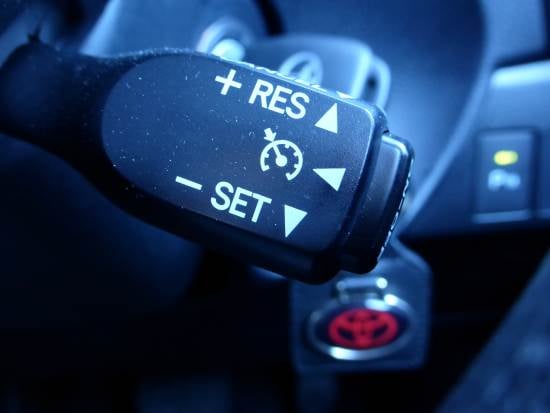 Is it possible for cruise control to cause you to crash when the road conditions are slippery? There’s an email that’s been circulating for years (at least since 2002) which purports to explain such as situation – a woman is driving along, using cruise control, and suddenly she loses all control and “literally flies through the air” and ends up crashing. Fortunately she’s not badly injured. Is this just someone who was useless at driving, or is it a lie, or maybe just an exaggeration?

It turns out that it’s an exaggeration, so let’s first see why ‘cruise control’ could become ‘lose control’.

How does cruise control work?

Cruise control works by monitoring your car’s speed and then adjusting the throttle inputs to keep it at the same speed. It’s usually only accurate to within 3-5kph so it’s not a good idea to set it to 107kph because you will almost certainly exceed the police’s tolerance occasionally. To maintain speed the engine has to fight against wind resistance, friction and power losses in the gearbox and differential, and the rolling resistance of the tyres. If you are driving uphill, there’s gravity to take into consideration, too.

Therefore when driving, the engine is always working because there’s always something pushing against the car, unless you are driving on a sufficiently steep downhill gradient that gravity means you will speed up even with no throttle input.

On/off – this enables the cruise control to operate, but it doesn’t mean it’s activated

Increment/decrement – you can add or subtract usually either 1, 5 or 10kph to the speed, depending on the system and options

Radar distance – if you have radar cruise control (also called adaptive cruise control) there are usually three distances, approximately 1, 2 and 3 seconds behind the vehicle in front, and the system will attempt to keep you at that distance, matching the speed of the vehicle you are following

Some systems also have a speed limiter, or a warning if you exceed the local speed limit.

Is cruise control dangerous in the rain?

The reason is because unsophisticated cruise control systems on older cars (or cheaper new cars) will continue to apply more power if it detects that it needs more power to maintain a particular speed. What makes this dangerous in the wet is aquaplaning (or hydroplaning). Aquaplaning is where your wheels ride up on a cushion of water, essentially skating over the surface of the water, because the tread in the tyres is not sufficiently deep to disperse it fast enough. When you are aquaplaning you have very little grip and therefore any acceleration applied to the engine will be able to make the wheels spin faster more easily.

In the case of the woman that crashed what would have happened is that she would have aquaplaned, the wheels would have spun which would have raised the pitch of the engine, making it seem like she was going faster even though she wasn’t, then she left the road and crashed.

If you get into a skid do you know what to do? Advice given in the Road Code for correcting skids is now outdated and dangerous. Find out why by checking out this.

Tagged with: aquaplaning, cruise control | Posted in Advice, Car
When was the last time you checked your Road Code knowledge?