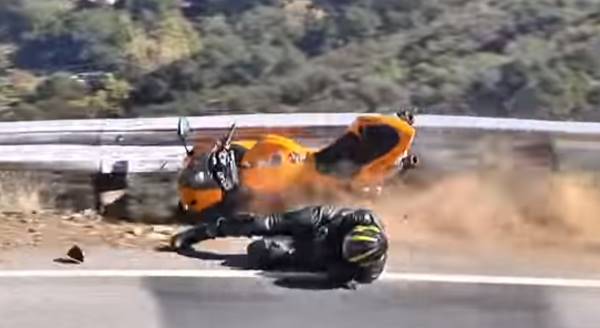 Two types of crash a likely to occur on corners when riding a motorbike: the lowside and highside crash.

The highside crash is the most dangerous of the two types of crash because the action of the motorbike tends to throw the rider over the handlebars and into the path of the bike. This means that the bike can hit the rider – basically a 250kg solid lump travelling at whatever speed you were doing. It’s like being hit by two Richie McCaws. Made of metal. A highside crash most often starts with the rider accelerating too hard either in a turn or on the exit to a turn, although it can also be the result of speed wobbles.

You can see how the rider is thrown into the air and this is why highside crashes tend to have a higher incidence of broken bones. It can cause a rider’s limbs to strike parts of the motorbike, for example the handlebars, causing bruising and broken bones.

It is possible to save a highside, but you have to be lucky rather than skillful.

The lowside crash is more common and is when the cornering forces exceed the grip available. The bike slips from underneath the rider and both bike and rider will slide off the outside of the curve. There are several ways it can be caused:

Lowside crashes are more likely on downhill corners and adverse camber corners (where the camber falls away from the corner) because you have gravity working against you. Low-speed lowside crashes are survivable with the right safety gear as the rider will simply follow the motorbike off the edge of the road. If speeds are higher, whatever is on the side of the road will arrest the rider’s and bike’s progress and at high speeds this will cause serious injuries or death.

If the front wheel has to do too much braking at the same time as turning, this happens:

If the rider applies too much throttle coming out of the corner the back wheel will spin and slide out from under the rider, like this:

As you can see, the rider was going quite slow, but it would have still hurt hitting that guard rail.

Tagged with: crash | Posted in Advice, Motorbike
When was the last time you checked your Road Code knowledge?