› › Six ways you will fail your heavy vehicle practical test

Six ways you will fail your heavy vehicle practical test 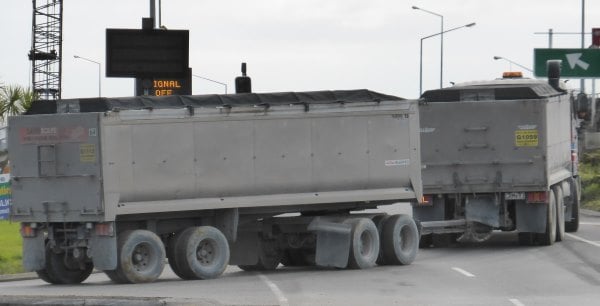 If you’re taking your heavy vehicle licence you’ll have spent a lot of time and money practising, so you want to get it right first time. We spoke to two senior heavy vehicle instructors, Iain at Passrite in Auckland and Peter at Prodriver in Timaru, to get their input on why people fail their heavy vehicle practical test. Their advice is below and is well worth reading before you take your driving test.

When you take your heavy vehicle test you will be expected to adhere to all the road rules including speed limits, lane discipline and road signs. But under the pressure of the test it’s easy to miss the simple things, especially if you’ve been driving a car for a while. Iain explains: “Stop signs are one. You’re worrying about your speed coming up to a junction and you forget that you have to stop.”

We spoke more about the relative sizes of heavy vehicles in relation to cars and the difficulties of driving them around tight city streets. Iain said, “Having a longer wheelbase it’s quite easy to cut a corner, or if you’re going right around a roundabout it’s quite easy to mount the wheels up on the kerb. Coming into those areas you really need to be slowing down.

“What we do for our students is we like them to be in third gear before they get to any intersection. Third gear is a standard gear for cornering. If you’re in third gear you’re doing around about 15kph, maybe a little less than that, so you’re coming in at a controlled speed where you have time to use your mirrors and adjust your lane position plus scan. When people come in too fast, like they’re coming in in fourth gear they’re cutting down how much time they’ve got to scan around, and they tend to cut in quite close and cut the corner.”

If you don’t use your mirrors you don’t know what is around you and you can put cyclists and other road users at risk. Mirrors are also useful to make sure you’re not too close to street furniture such as road signs.

“This happens quite a lot in class 2 and 4 – just rigid trucks only,” says Iain. “By the time they’ve got to class 5 generally they’ve got a few years’ driving experience behind them and they’re used to using their mirrors. Class 2 – it’s trying to get people into the habit of using their mirrors. That’s another thing – a lot of drivers coming from cars have tunnel vision; they might use their right mirror but very rarely their left mirror.”

Peter added, “At class 5 level the driver needs to have had driving experience at the lower licence levels. Until this experience has been gained I would not put a driver through the class 5 course.”

“One that’s more truck specific would be the clutch.” said Iain. “People coming from cars tend to keep their foot on their clutch a lot. If you’re doing that in a truck, especially coming up to intersections, you tend to lose control of the truck a little bit – you don’t have the engine friction slowing you down and you don’t have the exhaust brakes functioning.”

It’s important for a heavy vehicle driver to be gentle on the equipment and the cargo. An important driving style to preserve the gearbox and clutch, and to help prevent loads shifting is knowing how to change gear smoothly.

“What we look for is nice smooth gear changes. If you’re not changing at the correct rev range you’ll get a bouncy gear change and if this is done too often you can get a fail for that for not having good control of the truck,” said Iain, explaining that drivers that are used to driving cars and vans don’t understand how different it is in a truck. “You must change gear at the correct range – it’s different from a car. When you change down a gear you’ve got to make sure you drop your revs right down nice and low and that way you match the road speed to the gear you want to get into.”

Peter was insistent on the importance of practice and learning from the ground up so that drivers understand their vehicles.

There are advantages and disadvantages to this. It is obviously good for driver training schools though, because they are the ones that have most of the responsibility for driver training and can teach a new driver the correct way, rather than bad habits being passed on. However, it does make it more expensive to learn to drive a heavy vehicle.

Why do drivers fail their licence? Peter said, “Simply not enough time spent behind the wheel prior to sitting their licence, or incorrect tuition prior to assessment.”

If you don’t know your pre-drive checks then you won’t pass your test.

Other tips for passing the test

Thank you to Iain at Passrite in Auckland and Peter at Prodriver in Timaru for their input.

Tagged with: driving licence | Posted in Advice, Heavy Vehicle
When was the last time you checked your Road Code knowledge?