› › How much does a vehicle accident cost?

How much does a vehicle accident cost?

Fleet management companies have told us that the average cost to repair vehicles when they are returned is around $1000. That’s just car parking dings, minor scrapes, scuffed alloy wheels and interior and exterior cleaning. Around a quarter of all fleet vehicles are involved in some kind of accident a year, so this is a huge cost.

If the accident involves an injury to the driver, the costs are much higher. The Ministry of Transport estimates that an injury crash has a total social cost of $900,000 of which around $15300 are costs borne by a company that owns a vehicle involved in the crash.

$15300 sounds like quite a lot, so let’s break it down and see whether it’s realistic. Bear in mind these are direct costs, and if your company’s profitability is 20% on gross revenue, then you’ll need to pull in almost $77,000 in revenue to produce the profit to pay for the accident.

While every company’s scenario is different, you’ll incur at least several of the following costs in an injury accident. Let’s assume you have an technician you charge out at $130/hr and pay $40/hr driving a work van with some specialist equipment inside. The crash injures the driver, taking him out for two weeks, and damages both the van and the equipment.

Insurance excess on tools or goods carried in the vehicle – if you were carrying goods for a client and they were damaged, or you had some specialist equipment, you may have to pay a separate excess: Let’s say it’s $2000.

You’ve now claimed on your insurance, and insurance companies don’t like that because they like to make money. They put your premium up $2000 across your whole vehicle fleet. That means $6000 over 3 years! Ouch!

Administrative time dealing with the accident, letting the client know their goods won’t make it, or their work won’t be done. Costs vary here. You might be able to cover it with another one of your team, but that will still cost you for their time (e.g. a day at $50/hr is $400), or there’s every possibility if you don’t have the spare manpower to service the client that a competitor could win that work, and a lot of future work, and that could cost tens of thousands of dollars.

If the driver was at fault, there may be police documents that need to be dealt with, and witness statements to be collected. Let’s say 2 hours at $50. Hopefully the driver won’t get any demerit points that means their licence is suspended or disqualified otherwise you’ve either got the hassle of helping apply for a limited licence, or you’ll need to recruit and train someone else which is yet another cost.

If it’s possible for you to get a replacement vehicle that’s covered by your insurance company then you’ll have a couple of hours of downtime going to pick that up and take it back.

There are some direct costs for your employee who may be charged for the ambulance plus any specialist treatment required to recover from the injuries.

If the crash is deemed to have resulted in workplace negligence on the part of the company, the Police or Worksafe could prosecute you under the Health and Safety at Work Act 2015. The fines for contravening the Act can be extreme – enough to put a small company out of business. They tend to start in the low five-figure range and can top out in the millions.

You might have business interruption insurance which could help in the case of your employee not being able to work for two weeks, but let’s say that you don’t. You’re going to lose two weeks’ revenue which is over $10,000. You’ll still be paying the employee’s salary, though. It might be possible for you to bring in a separate contractor, but contractors always charge more, and there’ll be some time getting up-to-speed. Also, someone has to find and interview this person, so there’s more time spent by someone in your admin team. 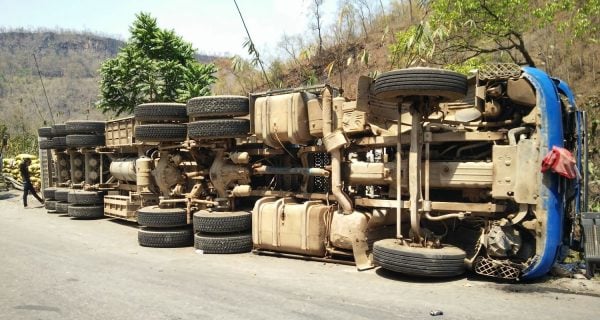 If your truck rolls and you have a huge excess, plus you lose the materials you were transporting, how much will it cost you?

How do you reduce the risk of these huge accident costs?

Practical driver assessments – doing them every 2-3 years these can really help.

Ensuring your drivers are legal to drive by using NZTA’s Driver Check or TORO, or manually sighting a person’s licence before they get into a vehicle.

If you eliminate just one accident it can save your company thousands of dollars. It’s much cheaper to train your drivers than it is to pay for an accident.

Tagged with: accidents, insurance | Posted in Advice, Fleet
When was the last time you checked your Road Code knowledge?