What’s the meaning of swept path?

When a long vehicle turns a corner the rear wheels follow a path with a tighter arc than the front wheels as the trailer is pulled around. The area between the innermost wheel’s path and the outermost wheel’s path is called the swept path and it means that the driver must position the vehicle wider on the approach to the corner so that the trailer wheels are not dragged across a kerb, hits street furniture, or (worse) the trailer itself hits a pedestrian on the inside of the curve.

For some very sharp turns into a narrow street or driveway, a long vehicle might need to move to the adjacent lane to give enough space to make the turn. This is why trucks over a certain length cannot use some roads which are narrow and have sharp corners. This doesn’t only include intersections, but also roundabouts (especially mini-roundabouts). A truck going straight ahead or turning right may need to use two lanes.

The fact that the heavy vehicle moves across a lane can sometimes confuse and catch out drivers following it. Long vehicles have blind spots that make it harder to see smaller road users like cyclists. They begin to overtake and the truck turns, leaving them with no place to go but under the wheels of the trailer. This has caused many deaths for cyclists and motorcyclists, so much so that in the UK it is now mandatory for trucks to have barriers (“side underrun protection“) between the rear wheels and the landing gear (legs) for an articulated vehicle or the rear wheels and front wheels for a rigid vehicle to stop cyclists and motorcyclists falling under the wheels in these occasions. 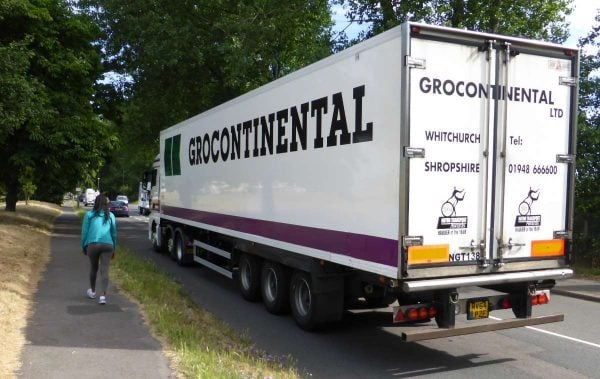 Articulated truck in the UK showing the trailer guard rail 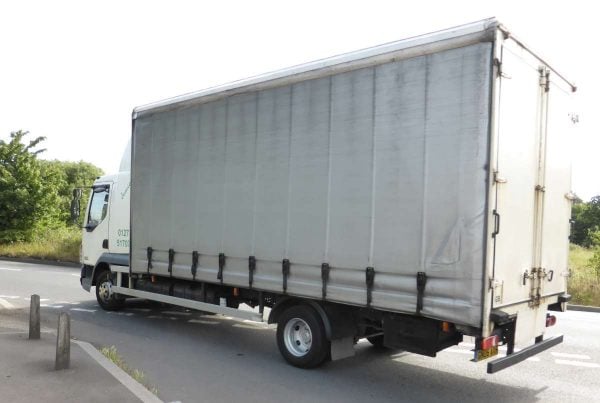 Motorists can help at intersections by stopping at or behind the line so that turning heavy vehicles can turn in more easily and issues like the off-tracking strike shown below don’t happen.

Long vehicles that might need to make these types of turns can have extra signage on the back to remind drivers. 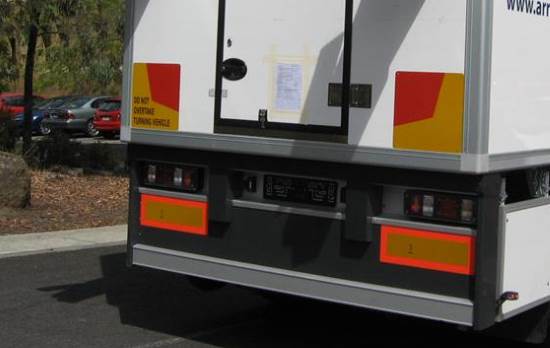 Swing out can occur when a trailer has a long overhang behind the rearmost wheels. The back of the trailer follows a wider arc than the wheels and can hit objects or people standing close to the kerb.

This video from Australia explains the concepts.

The shorter the trailer, the less of an issue the swept path and off-tracking becomes. A car towing a light trailer will not need to change line much, but a car towing a long caravan probably will. Car drivers don’t receive training in towing a trailer, whereas truck drivers do. Truck drivers know they should anticipate other road users trying to overtake them. Car drivers should ensure that they give plenty of warning by indicating early, positioning the vehicle on the road in a defensive way, and checking in blind spots for vulnerable road users.