› › Are you allowed to wear headphones while you drive a car or ride a motorbike?

Are you allowed to wear headphones while you drive a car or ride a motorbike?

There’s no law that says you are not allowed to wear headphones while driving a car or truck or riding a motorbike. However, that doesn’t mean it’s a good idea. Driver distraction comes in many forms and one of them is noise. You could be prosecuted if you have an accident and driver distraction is identified as one of the causes. 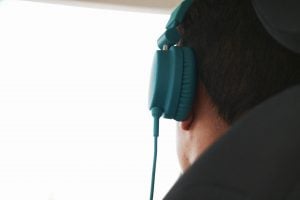 A study by Nelson and Nilsson, “Comparing headphone and speaker effects on simulated driving,” found that drivers listening to headphones took over 300ms longer to react to the need to change gear and 200ms longer to react to developing hazards. At 100km/h, a 200ms reaction time means the driver travels 5.5m further before reacting. This could be the difference between being able to stop safely and not being able to stop.

Other research has suggested that drivers find it much more difficult to accurately judge their speed when listening to headphones, presumably because of fewer auditory cues relating to speed (engine noise, wind noise and road noise).

Headphones tend to be close fitting and will block out more background sounds than listening through the vehicle’s speakers.

While noise cancelling headphones allow you to listen to audio at a lower level and therefore are better for your hearing, they are particularly dangerous as they will block out even more sounds that can alert you to danger.

If you do need to wear headphones to listen to audio from a device, wear them on only one ear so that at least your other ear is free to hear sounds around you clearly. Remember that you must not use your smartphone while driving and that includes changing your music selection – get everything set before you start, or pull over and make adjustments.

Motorcyclists do sometimes wear earplugs to deaden the sound of the engine and this will have a similar effect of reducing the perception of other noises.

If you are driving while on holiday remember that some countries, e.g. France, do have blanket bans on driving with headphones while others have bans for drivers doing certain driving tasks.

Tagged with: distracted driving | Posted in Advice
When was the last time you checked your Road Code knowledge?