› › Learning how to navigate

Learning how to navigate

Whether you’re just learning to drive or you are a visiting tourist about to take off on an adventure, it helps to know how to navigate in New Zealand. If you’re familiar with the countryside then you’ll know there are places where there are few signs to let you know where you are, and street lighting (and even houses) can be sparse. You could be driving quite some distance before you realise you have taken the wrong road and have to double back.

When I first moved to Auckland in 1994 I biked around because I couldn’t afford a car. I got lost quite a few times, but it made me fitter (and late once or twice), but I also figured out how to navigate using lots of different means.

When it’s daytime and dry, finding your way around is much easier. It’s when you find yourself on a dark country road or in an area of the city you’ve never been in before when it’s dark and rainy or foggy that you’ll need more skills.

Obviously many of you will have smartphones with data plans, and can therefore use Google Maps or Apple Maps as a GPS system, but this is less practical for motorbikes, and in some areas of New Zealand there is no data coverage (or even cellphone coverage). So, we’ll go through the multitude of ways in which you can help yourself if you get lost, starting with the most ancient ones first.

Where is the sun?

We’re in the southern hemisphere so the sun is always going to be in the north. Like in the northern hemisphere it rises in the east and sets in the west, so if you know roughly what time it is, you can judge your direction by the position of the sun. If you want to tell how long you’ve got before sunset, this trick works up to around an hour before the sun goes down. Hold your hand out toward the horizon with your fingers together. For every finger width the sun is above the horizon, you have 15 minutes. This only works for average width fingers.

Find due south using the stars

Some cars come with a compass in their trip computer. Scroll through the pages to find out if yours does.

Know the time and distance 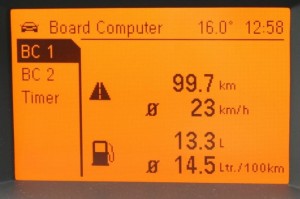 If you know the distance you should be travelling you should be able to anticipate how much time it will take you to cover that distance, according to the speed you are going. If you find yourself driving for, say, 10-15 minutes longer than you expect, it could be time to recheck your course.

Keeping an eye on your odometer is a good idea, too. Zero the trip meter when you leave so that you know how far you have travelled. If you didn’t do this, but you know how much petrol you had in the car, you might be able to make a rough guess based on how empty the fuel gauge is, but this will be very rough as fuel gauges are fairly inaccurate.

Some newer cars monitor how far you’ve travelled since the journey began. Check the trip computer functionality to see if yours does this.

Use a map book

Check the scale of the map to help you determine how long it’s going to take to get to a point where you know where you are.

Auckland in 1994 didn’t have the Sky Tower, but it does have a large number of volcanoes. These natural landmarks can be used to quickly get a précis of where you are. At that time One Tree Hill used to have a tree, and you could usually see Mount Eden and either Mount Albert or Mount Wellington.

These are just some of the examples of landmarks you can use in Auckland, but there will be similar examples in any other region and all you need to know is three or four of them and you can triangulate your position.

Some landmarks will have lights on at night, like the Sky Tower. If you get really stuck, try to find an elevated area and look for a major road – you’ll see these as a snake of brighter street lights.

Remember where what you’ve seen

Occasionally on the bike, I would accidentally loop back on myself while trying to find my way around. Make a mental note of interesting things you have seen and you’ll know if you pass them again.

You can glean lots of good information from buildings. Industrial and commercial buildings often have location information on them. For example, businesses in Penrose sometimes have Penrose in the name. This doesn’t always work – Herne Bay Dental is in Freeman’s Bay, not Herne Bay, for example, but it is close.

Getting lost on the bike was about expanding my area knowledge. I deliberately put myself in a situation where I had to find my way back – I never took a map. By doing this you get to know your area. Vary your route home, look for places of interest that you can visit nearby. By doing this your brain will start to develop a mental map of the area and, if you ever have to make a detour because of an accident blocking the road, you’ll know exactly how to get to your destination another way.

If you feel it’s safe to do so, stop and ask for directions. Service stations will usually have a map – they’ll most likely try to sell you one. Always write directions down when they are spoken to you because if you forget them or get confused it can send you off even worse as you’ll have confidence in the mistaken directions.

Many roads have road marker numbers periodically, particularly state highways. You might not see them that frequently, but pay attention when you do.

If you are travelling anywhere, you should learn the major roads and their names and/or numbers in the area so that if you do get lost you will know where you are should you stumble upon one of these familiar roads.

For example, if you are moving to, or travelling to Auckland, you should know the main motorways and perhaps the main radial routes south of the Harbour Bridge such as Great North Road, Dominion Road, New North Road, Sandringham Road, Mt Eden Road, Manukau Road, and Great South Road. These fan out southwards and you’re likely to cross one of them.

You can also approach this by learning roads that form the circumference of where you are likely to be travelling, i.e. roads you will definitely cross if you leave your designated area.

Knowing the major suburbs, towns or villages on the way to your destinations dramatically increases the likelihood of seeing a sign or other marker that has that name on. For example, if you are driving to Napier from Auckland, you won’t see a sign to Napier until you get to the Taupo bypass. You’ll need to know that you pass through, for example, Cambridge, Tirau and Tokoroa on the way (assuming you go via SH1B), and seeing signs for those will keep you in check.

OK, most people do have a GPS or satellite navigation, so let’s deal with that: many new cars have built-in satellite navigation, and for older cars, you can buy a third-party unit for a couple of hundred bucks. They are generally work pretty much anywhere, but you have to know how to enter a destination and start the route guidance.

The only problem is that they are not 100% reliable. You will come across stories of satellite navigation units that have directed people to drive into fields and streams and off bridges, and the wrong way up one-way streets. You still have to use common sense.

While your car’s satnav will have the maps preloaded, smartphones download the maps using your data plan from a supplier such as Google or Apple. Therefore, if you have no data available, your map software will not work.

If the software has downloaded enough of the map, the GPS will keep it on course for a while at least.

Getting lost can cause people to panic, but don’t worry. You’ve now got a huge number of strategies you can use to find your way to your destination.