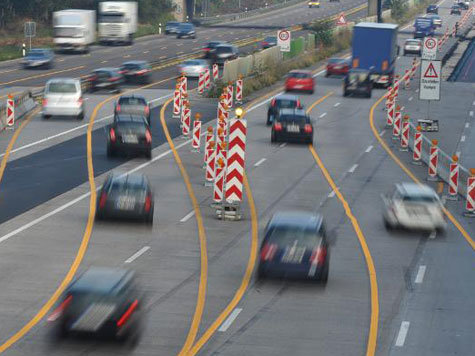 Roadworks in Germany showing orange tape, from this article about roadworks

“The tape helps reduce the risk of an incident, particularly on construction sites where driver attention is focussed on additional signage, speed limit changes and altered or narrowed lanes.  Risks can be compounded by the ‘ghost’ or ‘shadow’ of old markings confusing drivers, especially if there’s sun strike, rain or if it’s dark” Steve Mutton, acting Highways Manager, says. It’s already used in Germany and has improved safety.

“Its bright colour will contrast sharply with the highway surface and other markings, and drivers follow the orange lines as they would traditional white markings,” Mr Mutton says.

The specialised tape will be used both by contractors at construction sites and by the Auckland Motorway Alliance (AMA), which is responsible for the maintenance and operation of the Transport Agency’s motorway network.

There are obvious other benefits:

The main risks are whether motorists unfamiliar with the tape will become confused with it. Yellow lines are similar (however, they’re not used on motorways), so some confusion could occur if the tape is used on normal roads. Motorists could be educated using signage to indicate to drivers they should follow the orange lane lines.

“There are extensive changes to lanes at both sites, and it’s important we do everything possible to keep both road users and our contractors safe.  We’re confident an innovation like this tape will help reduce hazards and make driving through our sites clearer and safer,” says Mr Mutton.

NZTA didn’t define exactly how much the risks reduce, or whether there have been any accidents or fatalities on Auckland’s motorway networks in the (extensive) roadworks that are currently happening. We found out independently that between October 2008 and March 2011 the AMA had six fatal accidents, three of which occurred in work zones – none of the accidents were attributed to lane markings, though. The system seems like a sensible idea; I have once or twice been caught out in the rain at night by the shadow markings that Steve Mutton mentioned.

While you think this might be a new idea that NZTA is jumping on in the interests of safety, the initial report for this was completed in March 2011! Governmental wheels rotate very slowly. There was no word from NZTA whether it expects to roll the tape out (no pun intended) throughout the rest of New Zealand.